What is a scale? 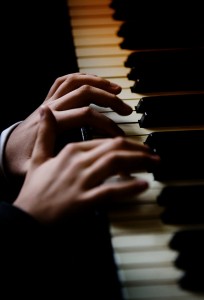 Ask an adult who studied piano about scales, and they will likely roll their eyes and scowl.  Scales bring boring repetition to mind. We tend to think of them the way football players think of push ups. “That’s three wrong notes in a row, drop and gimme F# Major!”

But this is unfortunate. Scales are our friends, they make music easier to understand and learn.  Scales are one of the building blocks of music.

A scale is a collection of notes, usually formed by a pattern of intervals.  The scale is named by the note it starts on, and the pattern the intervals follow from there.    The “Major” pattern goes:

If you start this pattern on a C, you would play all of the white notes, yielding the C major scale.  Stay tuned for a follow up post that will go into detail on other scale patterns.

From a practical standpoint, music is full of actual scales.  Once you can play scales, you can play most Beethoven and Mozart.  Ok, there is a bit more to it, but not much really.  Page after page will just be variations on playing a scale up and down.

Phase 1 – “Four finger” scales.  A few months into lessons, after basic concepts like rhythm, counting, etc, are mastered, students can begin playing one octave scales, with the notes split between the hands.  So, using C Major as an example, the left hand plays “C, D, E, F” (starting with the 4th finger), and then the right hand plays “G, A, B, C” (starting with the thumb).

Phase 2 – Start thinking about scales as patterns, not just notes.  This is emphasized by the observation that you can move the root of a scale up a fifth, and play the same notes you just played, with the middle finger of your right hand playing a half note higher than previous.  That is, take the notes from C major, play them starting on a G, only raising the third finger of your right hand a half step.  And this can be repeated through the whole circle of fifths.  The inverse is also possible, move the root down a fifth, and now lower the thumb of your left hand a half step.

Phase 4 – Play scales 4 octaves at a time, at a moderately fast tempo.  Emphasize smoothness in crossing over fingers, play all notes with a consistent, solid tone.  Introduce variations like playing in triplets, playing staccato to keep it interesting.  Part 2 will give some more examples on variations to try.

1) Never play a black key with your thumb

2.5) Try to minimize the number of cross overs

Try it, it really is that easy.  Scales that include a lot of black keys are the easiest because of rule 1.  If you only have 2 white keys, you know right off which keys your thumb will play.  Note that this is only true for 7 note scales.

Scales lend themselves to warm up sessions.  They are not technically challenging (at least not after a few years of practice), and they are a good pivot point for your brain and your fingers to shift into music mode.

But don’t think of scales as just for warming up.  There is a theoretical side to them that makes them an integral part of any music education.

Keep an eye our for part 2, wherin I will give details on different types of common scales, and suggest some ways you can vary scale practice to keep it challenging and engaging.

Music is the fundamental force that has moved my life.  No matter the other circumstances, the locations, the people, the activities, music has always laid the foundation.

This blog is dedicated to exploring the place of music in society, how best to communicate musical ideas to students, how to technically accomplish mastering the piano.  I will share what I have learned in the hope that it will help other teachers, other students, and with the further hope that they will offer me their advice and experiences as well.

There is no right way to learn music, and there is no wrong reason to do so. I have made many observations about some teaching techniques working better than others, about some method books being more useful, some compositions more worthy of study.  But when it comes down to it, the fundamental principle of teaching or learning piano, or any other instrument, is: