This is an ongoing series of posts called “Music Theory Rocks”, for an intro to the series and some music theory fundamentals, check out this post.

One of the eye-openingly cool things about music is the circle of fifths. A fifth (often called a “perfect” fifth) is 7 half steps. Moving by fifths up or down creates a circle that touches every note before starting over at the note you began with. If you start on a C and go up by fifths, the notes you will play will be:

Moving Up by Fifths

As you move left to right in the above series, you add a sharp to the major scale that starts on that note.

The inverse of this is also true, as you move right to left, you subtract a sharp (or add a flat).

Both of these patterns will lead to the same place, and then back around, hence the name circle of fifths. 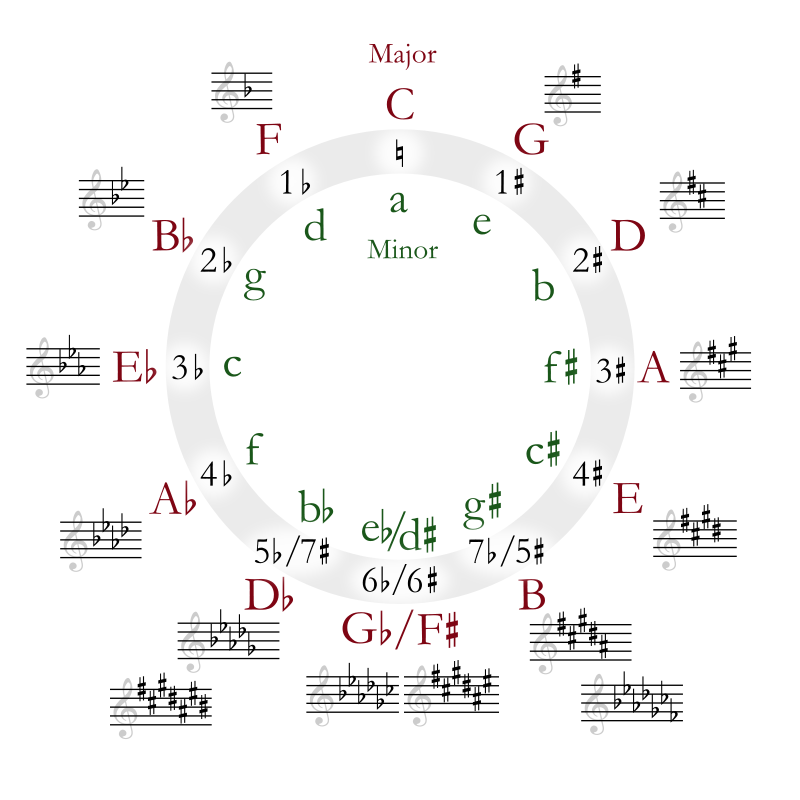 Circle of Fifths on Wikipedia

This chord progression features an Augmented triad, represented with a ‘+’. This triad is formed with a major third and a minor sixth from the root. The only other chord used is the minor IV, which is only one note different from the I+.  This is a stable, easy to follow chord progression, hovering around the I chord, the lowest note never actually even changes. As the piece moves through keys, this simplicity helps the listener maintain a sense of continuity through dramatic key changes.  If it were a more complicated progression, the piece would feel scattered, confusing, rather than dramatic and sweeping.

Here are the elapsed time marks in the piece at which modulations occur, the new key, the number of times the chord progression sounds before moving on, and any notes.