What is Music Reading? 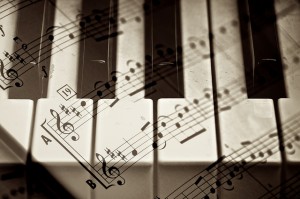 When learning to read, we first learn to recognize letters, then we learn common groupings of those letters over years of practice.  Recognizing letters alone is not reading, one must recognize words, and understand how the words are put together to form coherent thoughts.  In music, we must learn to recognize notes, and then learn how those notes are put together to form intervals, and finally, how intervals are used to form coherent musical ideas.

Most young students learn music from a combination of memory and note spelling.  The teacher plays the piece when it is introduced, and later, at home, he plunks it out until he can recreate approximately how it sounded.  At the next lesson, minor mistakes are corrected.  This technique is supplemented with various mnemonics for identifying notes on the staff, such as Every Good Boy Does Fine (where the first letters are the note names of the lines on the treble staff), or FACE, (the spaces of the treble staff), etc.

The problem with this strategy is that it does not scale to more advanced music.  When a student is learning beginner pieces, with one note sounding at a time, (mostly quarter notes and half notes), they can get away with playing by ear, because there isn’t much to remember.  But as the pieces get harder, it will be impossible to remember and they will have to fall back to the only other skill they know, note spelling.  This works, but it is agonizingly slow to go through a piece note by note, and this frustration is a big reason intermediate students end up quitting.  Imagine reading a book letter by letter, not only is it non-sensical (a letter doesn’t “mean” anything), it is impractical for a book of any significant length.

The human brain is incredibly good at finding patterns.  We cannot help but group things, seeing larger scale object rather than the aspects that create them. When reading a book, we perceive a word, not letters. Rather than windows, wheels, and a metal frame, we perceive a car.  Rather than seeing a football defense move as individuals, a quarterback perceives a zone blitz.  Operating on a higher level lets us process much more information than we could at a lower level.

How music is read

To read music, students have to learn to see the patterns that pitches create. 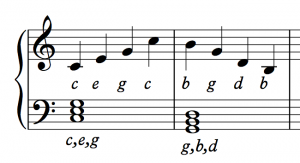 Level 1 is identifying notes on the staff.  Initially this is done by learning specific landmarks.  The treble clef circles around “Treble G”.  The dots of the bass clef enclose “Bass F”, and the first ledger line above the bass staff, or below the Treble staff is “middle C”.  As the student progresses they will pick up the names of all of the notes.  If they have trouble with this, flashcards or mnemonics are very useful. 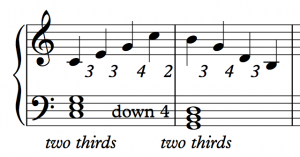 Level 2 is quickly identifying the distance between two notes, the “interval”.  These intervals are given names, based on how many steps of the scale away the notes are.  I have my students write an arrow with a number next to it between every pair of notes in their music when they are starting out on the staff.  Sometimes I even introduce a piece of music by giving them a starting note and then verbally instructing them “Third up, step down, step down”, etc. 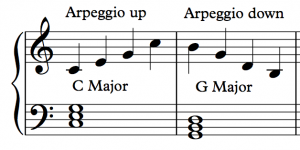 Level 3 is identifying larger scale patterns.  There are many types of such patterns (just as there are many sentence structures, many grammatical rules one has to learn when learning English or any other language).  The most useful to work on identifying are things like chord progressions, scales, accompaniment patterns.

The world of music is so much richer, so much wider, and so much more satisfying with the ability to read music.  One adult student described it as follows:

Before I could read music, playing the piano was like snorkeling in lake Michigan.  Now, it is like scuba diving the great barrier reef!