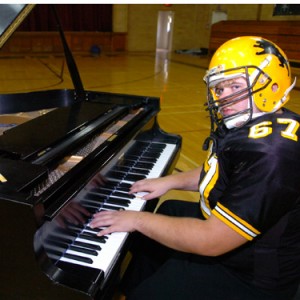 You turn on the TV.  You see 20 or so people dressed in bright colors and helmets.  They are just standing around, and then suddenly they run full force into each other.  One person runs as fast as they can and another person throws him an oblong ball.  The receiver catches it and runs a little ways before flinging the ball at the ground and starting to dance.

To the average American adult, this is not such an odd sight, but imagine if you had never seen a football game.  How much more do you appreciate the game after learning the rules, understanding the objectives, and appreciating the strategy?

This is what it is like to learn harmony.  Harmony is the language of music, learning even a little will change the way you listen to music forever.

The three building blocks of harmony are intervals, scales, and chords.

An interval is a name for the distance between two notes.  Starting from a C, a ‘minor second’ or ‘half step’ takes you to the note directly to the left (B) or right (C#)  A whole step would be two half steps, so a D or a Bb.

A scale is a pattern of whole steps and half steps.   The most common scale, “major”, is the pattern, w,w,h,w,w,w,h.  This pattern can be started on any note to create the “major” scale for that note.  The vast majority of melodic material in music comes from a single scale.  A composer selecting a scale is like an artist picking out the colors of paint they will use for their next work. 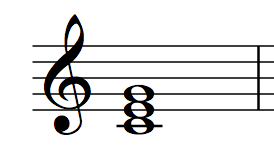 A chord is three notes played simultaneously.    Chords are named for their lowest note (called the “root”), and the scale from which the other notes come from.   A “C Major” chord starts on the note C and uses thirds from the major scale.  (A third is the interval that you get by skipping one note of the scale.)

By convention, we label these chords with Roman Numerals (numbers are used for so many things in music, this helps distinguish those that designate harmony). We also give them impressing sounding names so we can sound smart at dinner parties.  The I chord is called Tonic, the IV chord the Subdominant, and the V chord Dominant.

Harmony is a pattern of chords, a “chord progression”.  Usually, chord progressions are designed to create a feeling of departure and return.  Think of it like running the bases, we move away from home plate, touching on other chords, before returning home to the I chord, the Tonic.

Pop Music is full of the chord progression I, V, vi, IV.

Beethoven’s Ninth Symphony “Ode To Joy” melody alternates mostly between I and V (with a few harmonic flourishes here and there).  For the last twenty seconds of the piece, Beethoven repeats and repeats the I chord.  This gives the piece a strong sense of finality, of completeness.  It is how you can tell that the piece is over.

And that’s most of it.  Bam!  You are now a functional harmony expert.  Well, not quite, there are many more exciting twists and turns, but this is a great start.  Harmony is the language of music, learning to recognize it is like learning to read.  An entire world of appreciation and discovery awaits.

Piano lessons don’t work out for everyone.  Unfortunately there are a few reasons a student may quit that could have been avoided.  Here are a few such reasons I’ve come across and what you might try before giving up outright.

1)  They never learn how to read music.

Many students learn a piece of music by listening to the teacher play it, remembering how it sounded, and then plunking it out at home until the piece is recreated from memory.  Further, they are often under the impression that music reading is the same as music spelling.  They learn to name notes on the staff with tricks like “Every Good Boy Does Fine” and “FACE”, and this will work when there are only a few notes per measure.   But as the music gets harder, it becomes impossible to accurately recreate from memory, and using note spelling (“note by agonizing note”) takes an excruciatingly long time.   There is just too much going on and FACE does not scale.  Reading music is about identifying patterns; things like scales, chords, intervals.  If this is not learned, the student will have a hard time learning new pieces as the pieces get harder, and the pain of learning a new piece will begin to outweigh the joy of playing it.

To learn to read music, start with intervals.  Have the student write the interval distance right in the music for a few pieces to get her used to the new approach.  Then do the same thing with chords, and higher level patterns.  With a little hard work they’ll be reading music before you know it.

2) They never learn how to practice

Improvement, progress, is not achieved during lessons.  Lessons are course corrections, and practice is the wind in the sails.  But many students never learn what practicing the piano actually means.  In lessons, students usually perform the pieces for their teacher and receive feedback, so the logical conclusion of many students is that this is what they should do during practice sessions.  Practicing is not performing, however.  Practicing is the repetition of isolated elements of a challenge (see this previous post).  Without structured practicing, a student will take longer and longer to learn pieces as they get harder.

To help students practice better, come up with a structured practice regimen.  Help them break the music into smaller, practicable pieces that they can master quickly.  Encourage students to allocate time and set small, well defined, achievable goals (such as, “By the end of today, I want to play this line of music hand separately at 120 bpm”, rather than “I will get better at this piece”).   Progress is powerful, once they see the results of deliberate practice it will be easy to maintain.

3)  They never wanted to play in the first place

If getting a child to practice is a daily fight, it probably isn’t worth the effort.  If a student doesn’t want to practice, forcing them will only make everyone unhappy.  I’ve seen   students pushed into lessons, despite not showing any interest, because the parent always wished they had taken lessons.  While it’s possible that the student may come to like it, usually this is not the case.  Rather, if you’ve always wanted to take lessons, take them yourself!  It is never too late to learn to play the piano.  Upon seeing the joy it brings you, your child may be inspired to do likewise.

4)  They had a bad first impression

Often in young children, a subject is personified with an early experience.  When they think of “math”, they think of a grouchy math teacher, or particularly dull homework that was too easy.  And this experiential dislike is transfered to the subject itself.   Music is no different. If a teacher is grouchy or unprepared to handle your child, your child probably won’t think very highly of music.

Try exposing your child to music in other avenues, go to concerts, sing her favorite songs as a family.  Bring up your child’s reaction with your teacher as well.  Hopefully they will work with you to engage your child in a more effective way.

Its true that music lessons are not for everyone, but hopefully you can avoid these pitfalls that might squelch an otherwise burgeoning musical education.

What other reasons have you encountered that could have been avoided?